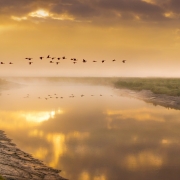 The Flying Geese model
According to the Japanese economist Kaname Akamatsu, Asian economies could grow based on a ‘flying geese model’. (FG model). Akamatsu noted that ‘Wild geese fly in orderly ranks forming an inverse V, just as airplanes fly in formation‘. After Japan achieved rapid economic recovery in the post-WWII years, it took the lead in economic development, whereas its neighbouring countries like Taiwan and South Korea followed suit.

During the 1930s, a Japanese economist, Kaname Akamatsu, initially sketched out a long span of history involving the evolutionary interrelationships of a developing Asian country (Japan) with the advanced West. His interest was to examine how developing countries in general may catch up with the advanced ones through their mutual interactions.

[…] Akamatsu presents a stylized four-stage model of evolving trade patterns of a typical developing country along its development process (catching-up), where the existing manufactured products are clustered into two broad categories: “consumer goods” and “capital goods”.

An excerpt from “The Asian Developmental State and the Flying Geese Paradigm” by the United Nations Conferenceo n Trade and Development.

Application on Asian economies
Although the FG model was developed in the 1930s, academics have based their research on this model in subsequent decades. While Japan was at the forefront of economic development in Asia, the ‘four tiger’ economies, namely South Korea, Taiwan, Singapore and Hong Kong, played catch up.

After the 1970s, when Japan moved into an upper ladder of technological-intensive sectors such as the automobile industry and machinery after the first energy crisis in 1973-74, Taiwan and Korea kept chasing behind Japan’s footstep by moving to an upper ladder of technological sophistication with some varieties in the second phase; while Korea developed its brand name of automobiles, Taiwan, due to the limit of domestic market for scale economy, chose to develop auto parts and machinery tools instead of manufacturing the whole passenger cars.

An excerpt from “A Century of Development in Taiwan: From Colony to Modern State” by Peter C. Y. Chow.

For Taiwan, the government emulated Japan by focusing on labour-intensive production and exported to industrialised economies, like the USA, in the 1960s. In the 1970s, Taiwan then shifted from labour-driven to capital-oriented industries in response to rise labour and import costs, which were exacerbated by the twin oil shocks.

To some extent, it was the ‘flying geese’ pattern of industrial development by following the footstep of Japan’s industrialisation in the post-war era. Meier argued that it was a process of ‘learning by exporting’ by picking up the industrial sectors that Japan left when it moved up on the ‘ladder of comparative advantage’.

[…] Taiwan, as one of the first tier of the flying geese, faced more competition in the second stage of EP (export promotion) from the second tier followers in South East Asia and China after its economic reform and openness.

What can we learn from this article?
Consider the following question:
– Assess the importance of the ‘Flying Geese’ model in explaining the phenomenal growth of Taiwan from the 1970s to 1980s. 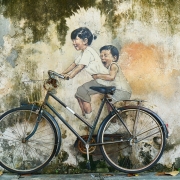 Humble beginnings: A SME run by family and friends
In 1972, a 36 year-old engineer King Liu founded Giant with a group of associates, including Tony Lo, in Taichung (臺中). Lo was a business graduate from the National Taiwan University. Interestingly, Liu cycled to work at first to understand his product better.

In 1977, Liu secured a contract to produce bicycles for an overseas American company Schwinn, which was known for its 10-speed steel machines. Giant then functioned as an Original Equipment Manufacturer (OEM). Liu, who was fluent in Japanese, visited Japan to study the bicycle production process, replicating suitable work practices at Giant.

An unexpected turn of events: Turning setbacks into opportunities for success
In 1981, Giant set up its own bicycle brand as an Original Brand Manufacturer (OBM). It was a bold and unusual move as products that were manufactured in Taiwan were still viewed as low-quality and cheap.

Five years later, Giant brought its bicycles to the global market, starting with the Netherlands. Lo had identified Netherlands as a suitable European headquarters due to its geographical location, comprehensive infrastructure and integrated transport network. From there, Giant exported to other European markets. By the mid-1980s, Giant exported nearly 10 million bicycles a year.

The own-branding strategy was intensified when Schwinn shifted its OEM orders to its joint China’s company (China Bicycle Company) in 1985. Under this adverse condition, Liu steered the company into a new direction, through rapidly expanding its overseas branches around the world, in order to fill up the excess capacity generated by Schwinn’s withdrawal. The overseas branches were all targeted on pursuing entrepreneurial profit by promoting its own-brand Giant bicycles. Its overseas branch was established in Netherlands in 1986, the Us in 1987, Japan in 1989, Canada and Australia in 1991, and mainland China in 1992.

An excerpt from “Entrepreneurship and Taiwan’s Economic Dynamics” by Fu-Lai Tony Yu.

In the 1985, the US-based Schwinn switched to a Chinese supplier to keep production costs low. As a result, nearly three-quarters of Giant’s revenue had been affected. Yet, Giant did not relent. Instead, the company capitalised on the low production base in China, setting up two production plants in China, namely in Shanghai (上海) and Jiangsu (江苏).

Close collaboration with the government
In 1986, Giant launched a joint project with the government-funding Industrial Technology Research Institute (ITRI). They explored use of advanced materials to create carbon fiber bicycle frames. Giant also worked on other technology diffusion projects for aluminum welding with Chun Shan Institute of Science and Technology (CSIST).

Giant’s R&D efforts had paid off as tts revenue rose to over NT$ one billion.

Now, Giant one of the top bicycle manufacturers in the world.

Giant thinks of itself as an innovator in the fields of production and design, as well as competitive strategy. Giant was one of the first to upgrade parts and begin exporting them when Taiwan’s market became too costly. Giant was also the first Taiwanese company to use chrome alloy steel in their frames and to produce single-piece graphite bicycle frames.

An excerpt from “Strategy, Structure, and Performance of MNCs in China” by Yadong Luo.

What can we learn from this article?
Consider the following question:
– How far do you agree that Giant’s successes in export promotion were the result of Confucian culture? 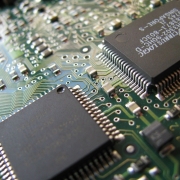 Historical context: Silicon Valley of the East
On 22 May 1980, the United Microelectronics Corporation (UMC) was formed as the first-ever private integrated circuit (IC) company in Taiwan. The UMC was a product of the state-backed technology R&D institution, known as the Industrial Technology Research Institute (ITRI).

Under the leadership of President Chiang Ching-kuo (蔣經國), the government embarked on an ambitious project to encourage knowledge and skills acquisition in the private sector to intensify Taiwan’s industrial development.

The UMC occupied the Hsinchu Science Park (HSIP, 新竹科學園區), which was modelled after the Silicon Valley.

Located in Hsinchu County, approximately 80 km to the south of the capital city Taipei, HSIP had easy access to the international airport and harbours, a skilled labour force and abundant technological resources, including two national universities and the government-sponsored ITRI. Since its inception, HSIP has received over US$500 million from the government, earmarked for the acquisition and development of land and construction of housing and factories.

An excerpt from “The Silicon Dragon: High-Tech Industry in Taiwan” by Terence Tsai and Bor-Shiuan Cheng.

Enter the age of semiconductors
Under the astute leadership of Robert Tsao (曹興誠), who became president of UMC in 1982, the UMC became the first IC manufacturer in Taiwan to provide wafer foundry services.

In the late 1980s, the UMC broadened its scope of production, venturing into Dynamic Random Access Memory (DRAMs) and telecommunications circuitry. Tsao believed that specialisation in foundry services was the ideal model for the UMC to thrive.

The UMC turned out to be a successful spin-off from HSIP, as seen by its entry to the Taiwan Stock Exchange in 1985. From then on, the UMC went further to build increasingly advanced chips, such as Static Random Access Memory (SRAMs).

A similar venture: The TSMC
In 1987, the Taiwan Semiconductor Manufacturing Company (TSMC) was set up. It was the second spin-off from the HSIP after the UMC. The company was a joint development with the Dutch company Philipps and the Taiwanese government.

Interestingly, the Chiang government had invited Morris Chang, who later became founder of the TSMC, to lead the ITRI in the early 1980s. Chang had put forward the idea of creating a foundry industry in Taiwan.

Originally the ERSO sent a team to RCA in the US to learn integrated circuit (IC) manufacturing technology. After the team returned to Taiwan, the members spun off from ERSO to form UMC, which began chip manufacturing.

[…] Chang led a team spun off from ITRI to form TSMC in 1987. The new business model proved effective, and TSMC became the largest semiconductor foundry in the world with $5.3 billion of sales in 2000. TSMC was therefore mainly a Taiwanese creation with state participation in ownership (48 per cent in the beginning).

An excerpt from “The East Asian High-Tech Drive” by Yun-Peng Chu and Hal Hill.

Evidently, the successes of the UMC and TSMC were partly attributed to the joint efforts of the Taiwanese and American governments (Electronics Research and Service Organization, ERSO, the Radio Corporation of America, RCA). By giving their founders and core team members the opportunities to acquire the technical know-how, the aim of creating a semiconductor industry in Taiwan could finally materialise.

What can we learn from this article?
Consider the following question:
– Assess the view the the United Microelectronics Corporation was a crucial piece of the puzzle in explaining the remarkable growth of Taiwan in the 1980s.