Historical context
In 1990, then Prime Minister of Singapore Lee Kuan Yew and the Malaysian Finance Minister Daim Zainuddin signed a Points of Agreement (POA). The POA was a declaration that the Malayan Railway station would no longer occupy the land at Tanjong Pagar. In exchange, a joint venture company would be formed to develop a plot of land of equivalent value in Marina South.

In 1993, both countries were supposed to move the Customs, Immigrations and Quarantine (CIQ) facilities in Tanjong Pagar to the Woodlands Train Checkpoint by 1 August 1998. Yet, in that same year, Zainuddin informed Lee on behalf of the Malaysian Prime Minister Mahathir Mohamad that the government had to re-look at the terms of the POA.

Points of Contention: The POA
As such, disputes arose due to differing views over the terms stated in the POA. The following was taken from a reflection made by the former Secretary General of Ministry of Foreign Affairs in Malaysia about the matter.

An excerpt from “Malaysia-Singapore Fifty Years of Contentions: 1965-2015” by Kadir Mohamad.

On 1 August 1998, when Singapore re-located its CIQ from Tanjong Pagar to Woodlands, Malaysia stood its ground, sowing confusion among the travellers and local authorities in Singapore. Subsequently, Singapore published its official correspondence with the Malaysian government.

Tun Daim too does not consider the POA to be of “treaty” status but simply points of agreement between the two Governments signed by him and Lee Kuan Yew as Prime Minister of Singapore in November 1990.

… As disagreements had arisen over its interpretation and status, Singapore offered to refer it to arbitration or, if both sides agreed, to submit it to the International Court of Justice (ICJ).

An excerpt from “Malaysia: Fifty Years of Diplomacy 1957-2007” by Jeshurun Chandran.

The Singapore government had made clear emphasis in its press release through the Ministry of Law that the POA was an agreement signed between two governments that came into effect on 27 November 1990.

The relocation of Malaysia’s rail CIQ operations from Tanjong Pagar to its own territory is a completely different and separate issue from the POA and status of Malayan Railway land in Singapore or the railway station at Tanjong Pagar. It is the sovereign right of any country to check entry into its territory at its borders as is done for ships, cars and aeroplanes between Singapore and other countries, including Malaysia.

An excerpt from a press statement issued by the Ministry of Law, 8 July 1998.

On 4 March 2002, Prime Minister Mahathir wrote a letter to Senior Minister Lee Kuan Yew, giving his stand on the POA issue. Mahathir stated that Malaysia would resume operations of railway service to Tanjong Pagar and that the Malaysian CIQ in Tanjong Pagar would be relocated in Johor Bahur. However, Malaysia is to be given “adequate compensation for all MRA land south of Kranji”.

Then Prime Minister Goh Chok Tong responded to Mahathir’s letter on 11 April as seen below:

I note that you have decided to relocate your CIQ to Johor Baru.

… I recall, however, that you had proposed at our meeting in Hanoi in 1998, to relocate your railway station to Kranji. I agreed to this proposal in my meeting with Abdullah Badawi when he visited Singapore in February last year. I confirm here that Singapore is prepared to accommodate such a variation to the POA within the bilateral package.

However, negotiations had stalled as Mahathir replied to Goh’s letter on 7 October that Malaysia had decided to discontinue the discussions. In March 2008, when Abdullah Ahmad Badawi assumed leadership in the Malaysian government, the new Foreign Minister Rais Yatim restarted negotiations with Singapore. In particular, Yatim acknowledged the 1990 POA as a ‘valid and legally binding document’.

Notably, both parties were undergoing proceedings in resolving the Pedra Branca dispute in the same year.

What can we learn from this article?
Consider the following question:
– How far do you agree that the Malaysian railway land dispute was effectively managed by Singapore and Malaysia?

Join our JC History Tuition to study other examples that explained the causes and consequences of inter-state tensions in independent Southeast Asia. The H2 and H1 History Tuition feature online discussion, class practices and post-practice review. We also conduct free timed practices for students to assess their level of competency in answering essay and source based case study questions.

What the Singapore-Malaysia Water Dispute is about 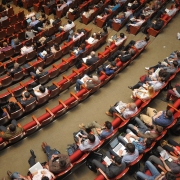 How did Margaret Thatcher influence the end of the Cold War?
Scroll to top