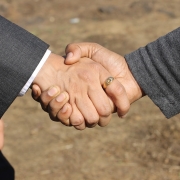 The document
George Frost Kennan was an American diplomat known for his ‘containment policy’. During World War Two, Kennan assumed diplomatic posts in Libson and Moscow. On 22 February 1946, Kennan sent a five-thousand word document labelled ‘511’. Given its unusually long length of writing, it was called the ‘Long Telegram’.

It was no coincidence that Marxism, which had smoldered ineffectively for half a century in Western Europe, caught hold and blazed for first time in Russia. Only in this land which had never known a friendly neighbor or indeed any tolerant equilibrium of separate powers, either internal or international, could a doctrine thrive which viewed economic conflicts of society as insoluble by peaceful means.

An excerpt from the ‘Long Telegram‘ by George F. Kennan to the Secretary of State, 22 February 1946.

Notably, Kennan’s had alarmed Washington as there were growing suspicions towards the Soviet Union over matters in post-war Europe. Kennan’s ‘telegram’ was delivered after Stalin gave a rousing speech at the Bolshoi Theatre on 9 February. Subsequently, Kennan assumed the role as director of the State Department’s planning-policy staff in 1947.

In July 1947, another article was written by Kennan, known as ‘X Article’. It was formally titled ‘The Sources of Soviet Conduct’. The article was considered an expansion of what Kennan had written in ‘511’.

In these circumstances it is clear that the mean element of any United States policy toward the Soviet Union must be that of a long-term, patient but firm and vigilant containment of Russian expansive tendencies. It is important to note, however, that such a policy has nothing to do with outward histrionics: with threats or blustering or superfluous gestures of outward “toughness.”

An excerpt from ‘The sources of Soviet conduct‘ published in the Foreign Affairs journal, July 1947.

What can we learn from this article?
Consider the following question:
– How far do you agree the outbreak of the Cold War was the result of Soviet expansionist policies?