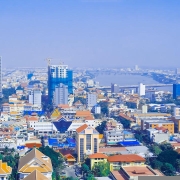 Historical context: End of a 16-year long war
At the end of the Third Indochina War, the Paris Peace Accords of 1991 were signed. With the help of the United Nations Transitional Authority in Cambodia (UNTAC) led by Secretary-General Special Representative Yasushi Akashi and Lieutenant General John Sanderson, free elections were held in 1993.

It was agreed that Prince Ranariddh would assume the leadership position of Prime Minister first, then Hun Sen as the Second Prime Minister.

The coup and its impacts
On 5 July 1997, the CPP led the military in a coup against the Cambodian government, ousting Prince Ranariddh and his royalist faction.

Foreign investment nosedived. Some governments suspended aid. Cambodia’s seat at the UN was vacated under American pressure and the country’s long- awaited admission into ASEAN was postponed.

[…] These critics in Congress combined the democratic triumphalism of the post-Cold War years with a hangover from the US humiliation in Vietnam. Hun Sen, in their view, was a dictator and a war criminal. Not only had he been installed by communists, but he had been installed by Vietnamese communists. Rohrabacher later dubbed him “a new Pol Pot.”

An excerpt from “Hun Sen’s Cambodia” by Sebastian Strangio.

More importantly, ASEAN had initially contemplated on extending an invitation to Cambodia to join as a member. In 1994, Cambodia was granted ‘observer’ status’, preparing it for the attainment of full membership. Following the coup, ASEAN announced its decision to postpone Cambodia’s membership admission.

Even so, ASEAN remained optimistic in offering a peaceful solution to the crisis in Cambodia. Three foreign ministers (Ali Alatas of Indonesia, Prachuab Chaiyasan of Thailand, and Domingo Siazon of the Philippines) formed an ‘ASEAN Troika‘ that offered to mediate the matter in Phnom Penh on 19 July 1997. However, the talks failed.

The Western donors and the ASEAN Regional Forum (ARF) endorsed ASEAN’s lead role in resolving the Cambodian crisis. US Secretary of State Madeleine Albright emphasised that foreign aid was now conditional upon ASEAN intervention, stating that ‘cooperation with ASEAN mediation… is essential if Cambodia is to fully rejoin the international community’

[…] The ASEAN Troika’s first proposal, issued on 19 July, was for Ranariddh to be reinstated and for both co-prime ministers to appoint representatives to run a ‘caretaker government’ until the May 1998 elections. Hun Sen rejected this.

An excerpt from “ASEAN, Sovereignty and Intervention in Southeast Asia” by Lee Jones.

Hun Sen criticised ASEAN for not adhering to its non-interference principle. Sen claimed that the political turmoil in Cambodia was its own domestic matter, thus ASEAN had no jurisdiction. Fortunately, the talks finally bore fruit as Sen agreed to join ASEAN on 30 April 1999.

When ASEAN decided to postpone Cambodia’s membership, [Hun Sen] threatened to withdraw Cambodia’s application: “I am afraid of joining ASEAN because of ASEAN interference in internal affairs.” However, in the end, Hun Sen accepted ASEAN as a mediator on the condition that it refrained from interfering in Cambodia’s internal affairs and respected its role of strict neutrality.

An excerpt from “The Changing Global Order: Challenges and Prospects” by Madeleine O. Hosli and Joren Selleslaghs.

What can we learn from this article?
Consider the following question:
– How far do you agree that governments were responsible for the economic instability in independent Southeast Asia?

Join our JC History Tuition to learn more about ASEAN as well as Regional Conflicts and Cooperation. The H2 and H1 History Tuition feature online discussion and writing practices to enhance your knowledge application skills. Get useful study notes and clarify your doubts on the subject with the tutor. You can also follow our Telegram Channel to get useful updates.